News from the Dean’s Desk at

Congratulations: to Mrs. Sighle Fitzgerald who has been elected by MACTE to be a recipient of the Wisdom of the Elders award.  MACTE awards this honour to distinguished Montessorians who have made an immense contribution to the Montessori movement worldwide.   Mrs. Fitzgerald’s amazing resume is at the end of this blog.

Michelle will have copies of her book: Autism: A Montessori Approach – for sale at $12 per book.  Please contact Debbie Couture at 416 640 1565 to register.

We loved meeting Katherine Barber last Saturday when she presented a fascinating workshop: Why is the English Language so Wacky?  See picture below.   Katherine also presents amazing workshops on Ballet. 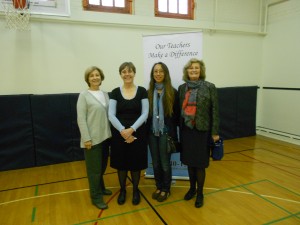 CAMT Conference on Friday, November 1:  We look forward to meeting new and old friends at this stimulating annual event and will include a selection of photos in next week’s blog.

Introduction to Montessori philosophy and materials for Assistants

Later in Spring 2014 MTC will offer an enriched review course for those who have already taken the Assistants’ course.

Two Day Workshops:   Debbie Couture, Director of Training for this programme will teach at Montessori for Seniors, 16 Coldwater Rd. North York, ON on the following dates:

Mrs. Sighle Fitzgerald:  Elected to MACTE Wisdom of the Elders.

During the years 1984 – 1986 Sighle also served as Principal of the St. Nicholas Montessori Centre in London, UK.

Sighle moved to Bermuda in 1990 and was Principal of Bermuda Montessori School and Montessori Academy from 1990 – 1992. She also presented an Early Childhood training program in Bermuda in those years.

She then moved to Toronto where she was Director of Primary training from 1992 – 1997 at the Toronto Montessori Institute.

Sighle trained thousands  of students in Ireland and also at the following locations:

Sighle is an inspirational Montessorian who has touched the lives of thousands of  people in five continents.  Her first language is Gaelic, and her interests include music, reading, theatre and travel.  She is a mother, grandmother and now a great-grandmother.